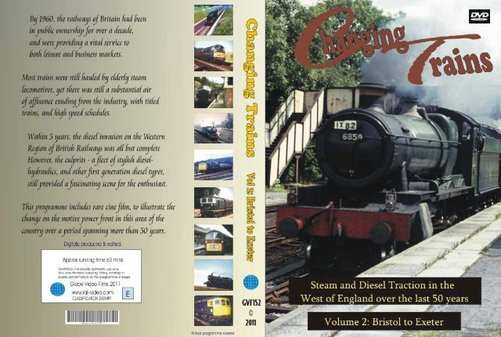 This entertaining DVD programme includes rare cine film to illustrate the change on the motive power front in the Western Region of the country, spanning more than 50 years.

Be enthralled by other footage such as Hymeks, Warships & Westerns on the mainline including Western Champion in Golden Ochre livery; Taunton station with class 45, 47, 50 & 52 in dramatic action;

Going back in time we visit the re-opening of the first train in 1976 at Wiveliscombe and Venn Cross stations on the Taunton-Barnstaple route with North British Locomotive (NBL) D6300 type 2s in action; 1451 on the Hemyock branch.

In addition the very last Travelling Post Office (TPO) leaves Exeter St Davids station. Of added interest is the comparison in the railway infrastructure in this 50 year period, with contemporary views showing the scenes as they are now.

This DVD, which is just over an hour long, is the second in the series looking at steam and diesel trains in the West of England over the last 50 years.

This volume covers Bristol to Exeter.

The footage varies in quality, of course that from the 1950s & 60s is of low quality, but understandable given it's age.

There is also coverage of some of the branches that diverged away from the route, such as to Hemyock (sadly a section with no sound, so music is dubbed over it) from Taunton to Barnstaple and also Taunton to Minehead.

There is about a 40/60 split in favour of diesel traction, with some nice scenes of the now extinct Class 22s and Class 43s at work as well as Hymeks,

Class 42s, Westerns & Diesel electrics such as Class 25s, 45s, 47s and 50s amongst others. More modern traction is also included on HSTs and Class 220s,

Captions appear on screen to tell you the loco numbers where known and commentary sets the scene and provides a historical account.

An interesting film with plenty of nostalgia and one that should appeal to those with a penchant for this area."

This is the second in a five part series which will form a definitive DVD collection illustrating more than half a decade of change on this western peninsula.