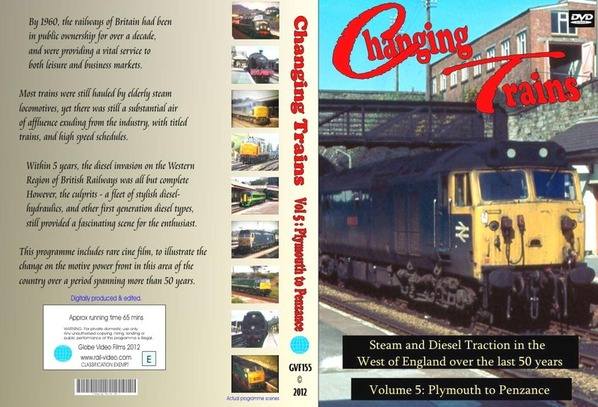 This programme includes rare cine film to illustrate the change on the motive power front in this part of the country over a period spanning more than 50 years.

Volume 5 is the final part in a five part series and looks at the route from Plymouth to Penzance, including the Gunnislake, Looe, Bodmin, Fowey, Newquay, Falmouth and St Ives branches, plus scenes from Wadebridge and Padstow.

Highlights include: early diesel-hydraulic scenes at Plymouth North Road plus Western & Southern steam, Warship at Devonport Junction; Moorswater freight; Warship & Grange at Redruth; 25s & 37s on Cornish Clay traffic; 37s and 50s at Par and an 08 on the Harbour branch: Prarie tank & NBL D6342 at Falmouth; West country Mail trains; classes 25, 42, 50 & 52 at Hayle and a 37 on the wharf branch; the Prototype HST on test at St Erth, etc ....

'What a great series this had been, I've enjoyed every one in the series' -  Mr George, Hampshire