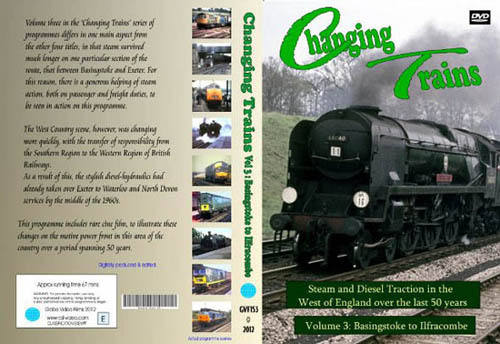 Volume 3 in the series looks at the route from Basingstoke to Torrimgton and Ilfracombe via Exeter.

Highlights include Steam & early diesel hydraulics at Basingstoke; mainline action between Basingstoke and Salisbury plus visits to Salisbury shed in the early 1960s and then after closure, when we see all the withdrawn locos waiting to be towed away. Steam & diesel at Templecombe, stations to Yeovil Jn and beyond; action from the Lyme Regis, Seaton, Sidmouth and Exmouth branches. 1960s & 1990s views at Exeter, then onto Okehampton, Barnstaple, Torrington and finally Ilfracombe. See an 'N' class and T9 at Okehampton, then the last day passenger services, Class 22s at Torrington and Hymek & Warship action on the Ilfracombe route.

This latest video in the series features steam and diesel in equal measure spanning som 50 years, and with views at major locations along the LSWR Main Line, it's non stop action.

If you have a penchant for 'Hymeks' you will not be disappointed. However, the highlight has got to be the scenes on the 'Withered Arm' section from Exeter to Barnstaple, Torrington and to Ilfracombe. We are talking here of North British type 2s and 'Warships'. Again the video captures the folly of closing such lines.

Scenes on the Meldon - Ilfracombe section are truly historic, and there are views of it's famous train - the 'Atlantic Coast Express'  (ACE), and the through Paddington-Ilfracombe service with 'Warship' haulage.

There's a nice interlude showing the halcyon days of Class 50 rule on the LSWR line to Exeter showing many of the favourites - it's hard to believe this was over 20 years ago.

There are some more modern scenes taken in the last 10 years but predominantly we are talking the good old days. The modern video recorded scenes are intermingled with the cine footage (thus mixing the quality of the recording) which is a good idea as it allows some interesting 'then and now' views which show just how much the Exeter line has changed, particularly at places like Templecombe.

This is superb entertainment, particularly if you were there at the time it was filmed. Roll on Volume 4 which is Exeter to Plymouth.

This is the third in a five part series which will form a definitive DVD collection illustrating more than half a decade of change on this western peninsula.